From the Past to the Future: Ideas and Actions for a Free Society | The Mont Pelerin Society 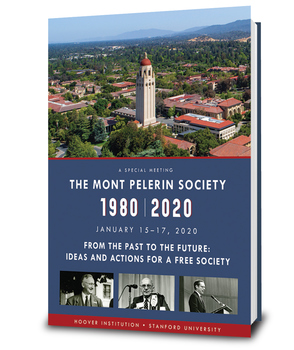 In this collection leading scholars and practitioners discuss ideas about freedom and how to take the ideas into action today. The discussions took place at a January 2020 meeting of the Mont Pelerin Society which was founded in 1947 for the “preservation and improvement of the free society.” Today, challenges to the free society are again mounting and threatening economic growth and rising prosperity. We hear calls for a return to socialism, for restrictions on trade, for regulations on firms and individuals that go well beyond cost-benefit calculations.

The theme, From the Past to the Future: Ideas and Actions for a Free Society, comes in three parts:

PART 1. PAST AS PROLOGUE TO THE FUTURE

Chapter One: Why Choose Economic Freedom?, by George P. Shultz and John B. Taylor

Chapter Two: Introduction to Free to Choose 1980 to 2020 and the Network, by Robert Chatfield
Chapter Three: Milton, Rose, Me and Poetry, by Robert Chitester

Removing Obstacles on the Road to Economic Freedom: 1947 to 1980

Spread of Free-Market Ideas in the 1980s

Chapter Eight: The Reception of Free to Choose and the Problem of Tacit Presuppositions of Political Economy, by Peter Boettke
Chapter Nine: The Spread of Free-Market Ideas in the 1980s
(With a Nod to the Late 1970s), by David Henderson
Chapter Ten: Ideas of Freedom and Their Role in Active Policymaking, by Condoleezza Rice

Lessons Learned from History for the Future of Freedom

PART 2. IDEAS FOR A FREE SOCIETY

The Role of Law as Protector of Liberty

Chapter Fourteen: Capitalism, Socialism and Nationalism: Lessons from History, by Niall Ferguson
Chapter Fifteen: Magna Carta, The Rule of Law, and the Limits On Government, by Jesús Fernández-Villaverde
Chapter Sixteen: The Commerce Clause, the Takings Clause, and Due Process, by Douglas Ginsburg

How to Deal with the Reemergence of Socialism

Chapter Seventeen: The Rise and Fall of Environmental Socialism: Smashing the Watermelon, by Jeff Bennett
Chapter Eighteen: Understanding the Left., by John Cochrane
Chapter Nineteen: Economic Systems Between Socialism and Liberalism and the New Threats of Neo-Interventionism, by Lars Peder Nordbakken

PART 3. ACTIONS FOR A FREE SOCIETY

Taking Ideas to Action around the World

What Happened in Chile?

Taking Ideas to Action: Making the Case for Freedom

Taking Ideas to Action in the Private Sector
Chapter Thirty-Eight: Public Policy, Private Actor, by Dominique Lazanski
Chapter Thirty-Nine: Libertarianism is Dysfunctional but Liberty is Great, by Joe Lonsdale
Chapter Forty: The False Promise of Medicare for All, by Sally Pipes